First arbitration under Part 23 of the National Gas Rules

For many years, the large majority of Australian gas transmission pipelines have not been subject to formal economic regulation. In 2017, this changed with the introduction of Part 23 of the National Gas Rules. The new rules establish a regulatory framework allowing for binding arbitration to resolve access disputes and applying to pipelines that have not been assessed as meeting the criteria for the pre-existing forms of regulatory intervention.

The overarching objective of the regulatory framework is to facilitate access to non-scheme pipelines on terms and conditions that reflect the outcomes of a workably competitive market.

A pricing and access dispute between Tasmanian Gas Pipeline (TGP) and AETV, the electricity generation subsidiary of Hydro Tasmania gave rise to the first arbitration to be heard under the new rules. The backdrop to the dispute was a lessening reliance on gas fired generation to meet Tasmania’s energy needs, but an ongoing need to retain such capacity for the medium term to provide sufficiently reliable electricity supply.

Greg Houston and Daniel Young prepared two reports for King & Wood Mallesons, on behalf of TGP, explaining the concept of a ‘workably competitive’ market and the outcomes it would be expected to promote. Reflecting the outcomes of workably competitive markets in an industry context in which many gas pipeline services are thought to be natural monopolies gives rise to complex issues. A key insight of their analysis is that lower demand for gas pipeline services may not necessarily give rise to lower prices for those services.

In workably competitive markets, prices reflect economic costs – both fixed and variable. If the cost structure of the industry is such that its average costs are declining over the range of market demand, then a contraction in demand will give rise to an increase in price – as illustrated below. 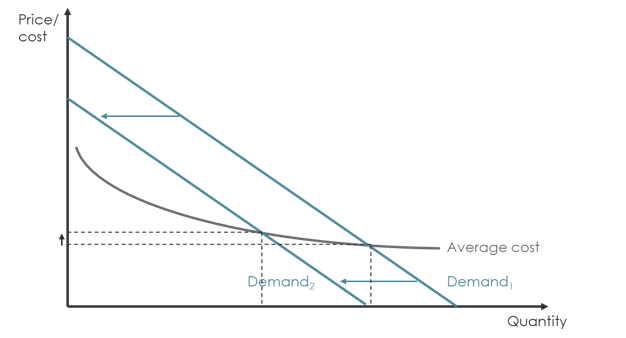