Auckland Transport (AT) and NZ Bus fell into dispute in the context of negotiations in relation to the contract price for two directly appointed Auckland bus services. Bell Gully, on behalf of AT, asked us to advise on the appropriate application of data envelopment analysis (DEA) to establish the benchmark price range.

Under the public transport operating model introduced in 2013, AT contracts for the provision of many of Auckland’s bus services by means of competitive tender. The remaining bus services are directly appointed under transitional arrangements with incumbent commercial bus operators.

The public transport operating model (PTOM) requires that the prices for directly appointed services are assessed against a benchmark price range established using DEA from competitively tendered bus services, with this range extending from:

DEA assumes the existence of a production process that converts a set of inputs into a set of outputs and seeks to determine both which producers are most efficient and measure the extent to which other producers are inefficient.

By way of example, the chart below depicts the productive efficiency of four hypothetical cafes that employ staff to prepare coffees and sandwiches. The efficient frontier is defined by the cafes A and C, since they each serve a combination of sandwiches and coffee that is not matched by any other café. Cafes B and D do not achieve the same combinations are assessed as being inefficient relative to this frontier. 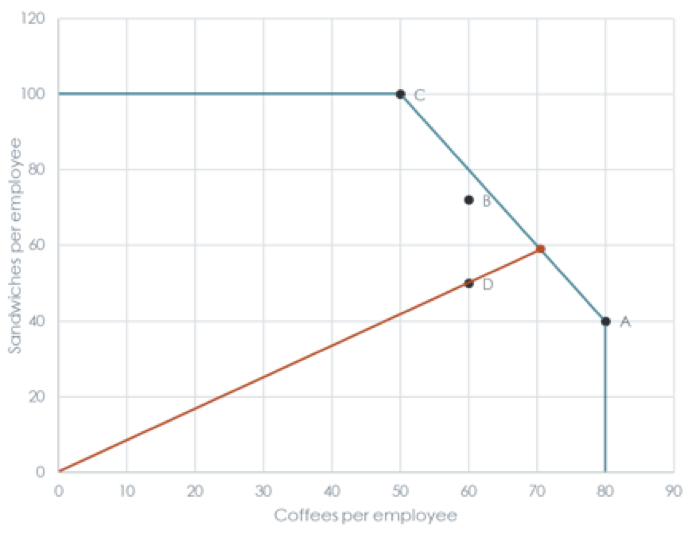 Daniel Young prepared two expert briefs of evidence addressing these questions on behalf of AT and provided expert testimony at arbitration on this evidence. Daniel used DEA to show that NZ Bus’ proposed prices for directly appointed bus services were higher than the upper bound formed by reference to the least efficient market price. Daniel also evaluated other quantitative evidence relied upon by NZ Bus in support of its proposed prices.